Our recent paper, "A machine-learning approach for long-term prediction of experimental cardiac action potential time series using an autoencoder and echo state networks", has been accepted to be published in "Chaos: An Interdisciplinary Journal of Nonlinear Science" published by AIP.

Computational modeling and experimental/clinical prediction of the complex signals during cardiac arrhythmias have the potential to lead to new approaches for prevention and treatment. Machine-learning (ML) and deep-learning approaches can be used for time-series forecasting and have recently been applied to cardiac electrophysiology. While the high spatiotemporal nonlinearity of cardiac electrical dynamics has hindered application of these approaches, the fact that cardiac voltage time series are not random suggests that reliable and efficient ML methods have the potential to predict future action potentials. This work introduces and evaluates an integrated architecture in which a long short-term memory autoencoder (AE) is integrated into the echo state network (ESN) framework. In this approach, the AE learns a compressed representation of the input nonlinear time series. Then, the trained encoder serves as a feature-extraction component, feeding the learned features into the recurrent ESN reservoir. The proposed AE-ESN approach is evaluated using synthetic and experimental voltage time series from cardiac cells, which exhibit nonlinear and chaotic behavior. Compared to the baseline and physics-informed ESN approaches, the AE-ESN yields mean absolute errors in predicted voltage 6–14 times smaller when forecasting approximately 20 future action potentials for the datasets considered. The AE-ESN also demonstrates less sensitivity to algorithmic parameter settings. Furthermore, the representation provided by the feature-extraction component removes the requirement in previous work for explicitly introducing external stimulus currents, which may not be easily extracted from real-world datasets, as additional time series, thereby making the AE-ESN easier to apply to clinical data.

Time series of cardiac electrical signals during arrhythmias can exhibit highly nonlinear and chaotic dynamical behavior, making forecasting of their dynamics challenging. However, estimates of future system states could facilitate the development of improved arrhythmia control and termination methods by allowing opportunities for early intervention. Data-driven methods have shown promise in forecasting tasks, such as these, but finding appropriate values for the many network parameters and hyperparameters involved is a difficult and time-consuming task. Here, we aim to decrease sensitivity to parameter values and to improve performance in a cardiac application of an echo state network (ESN) by incorporating an autoencoder (AE), which automatically extracts signal features to learn a compressed representation of the time series. We show that the integration of an AE with an ESN can produce reliable and robust predictive models for long-term forecasting of experimentally recorded complex cardiac action potential time series. 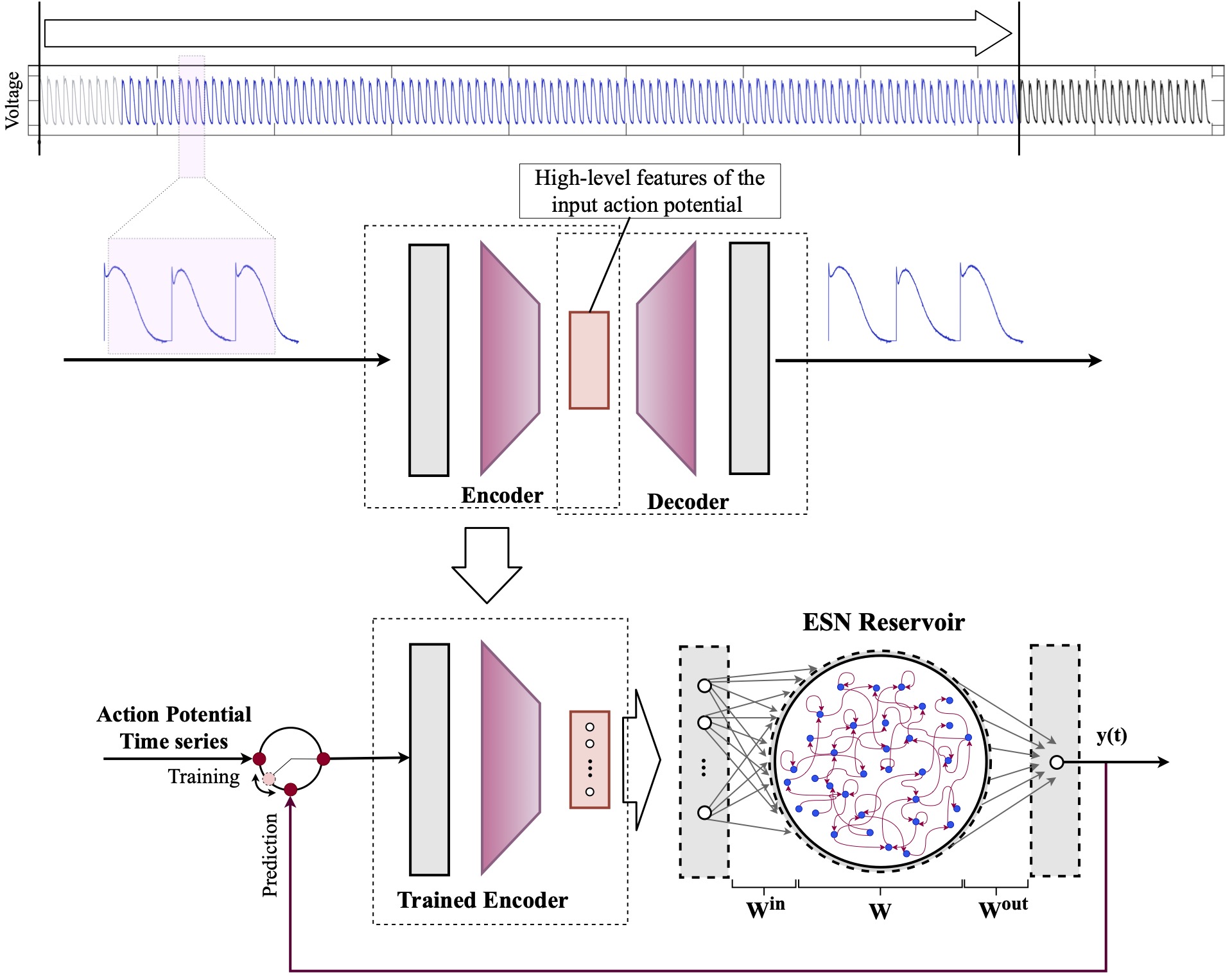 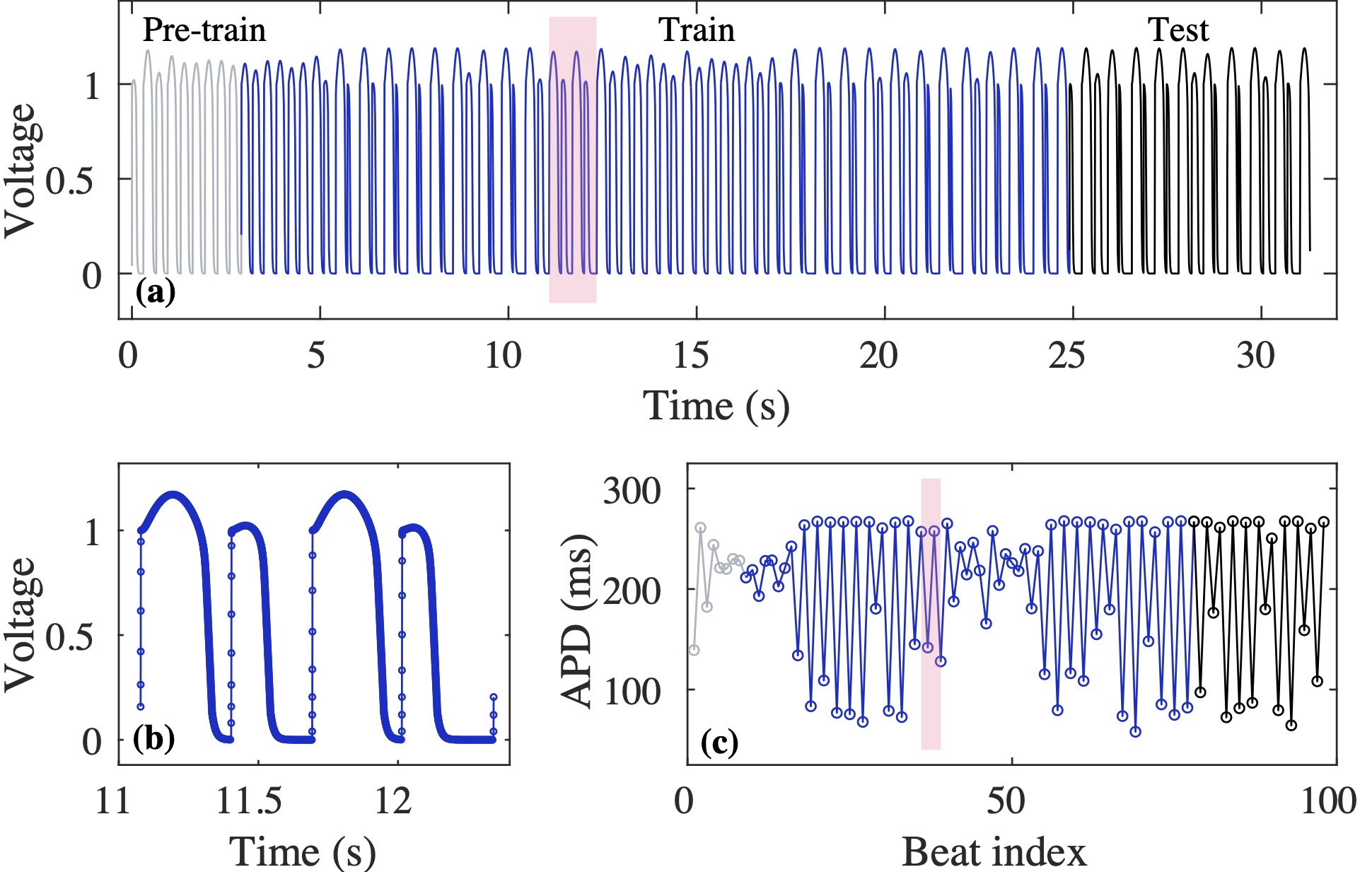 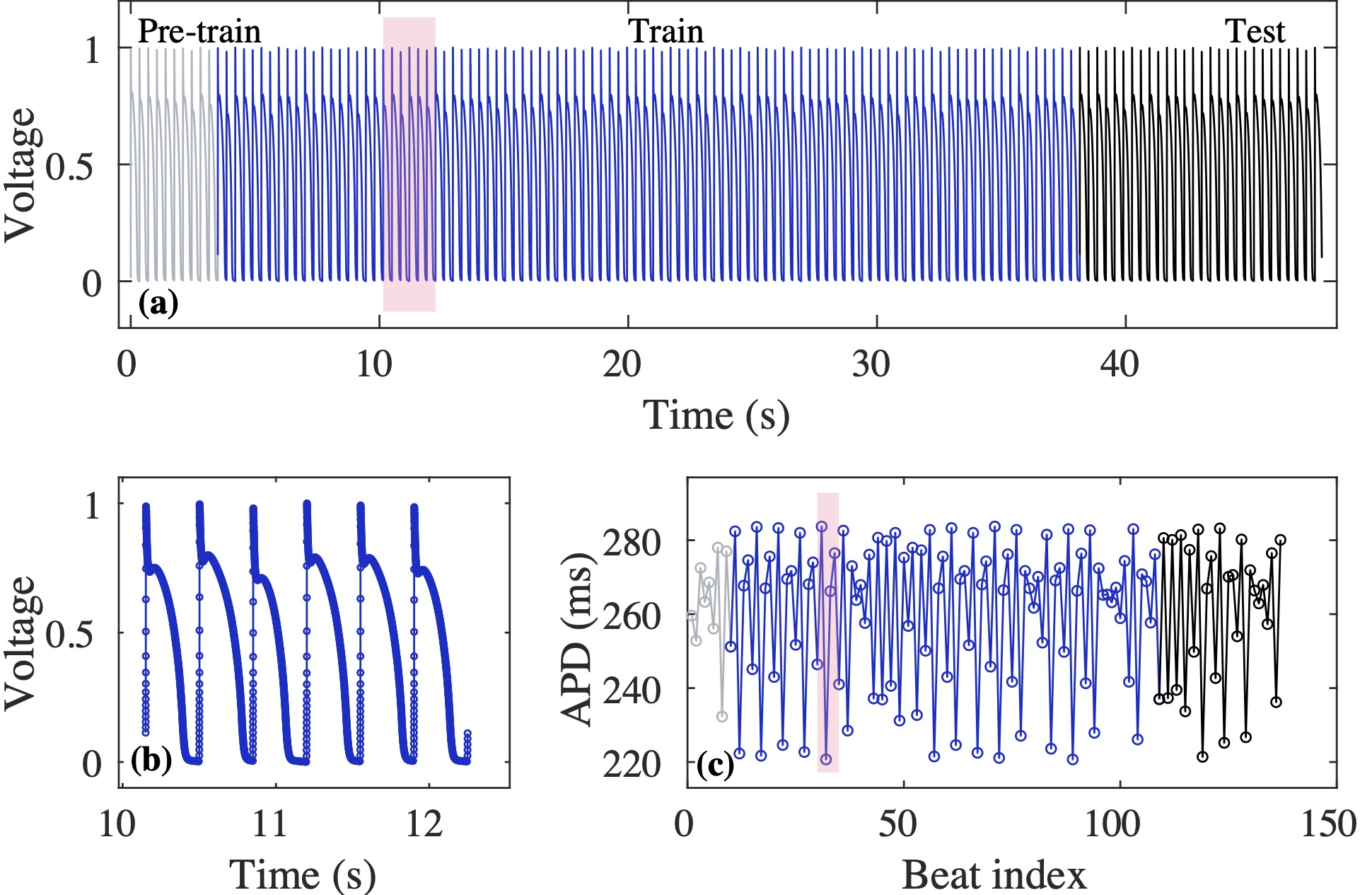 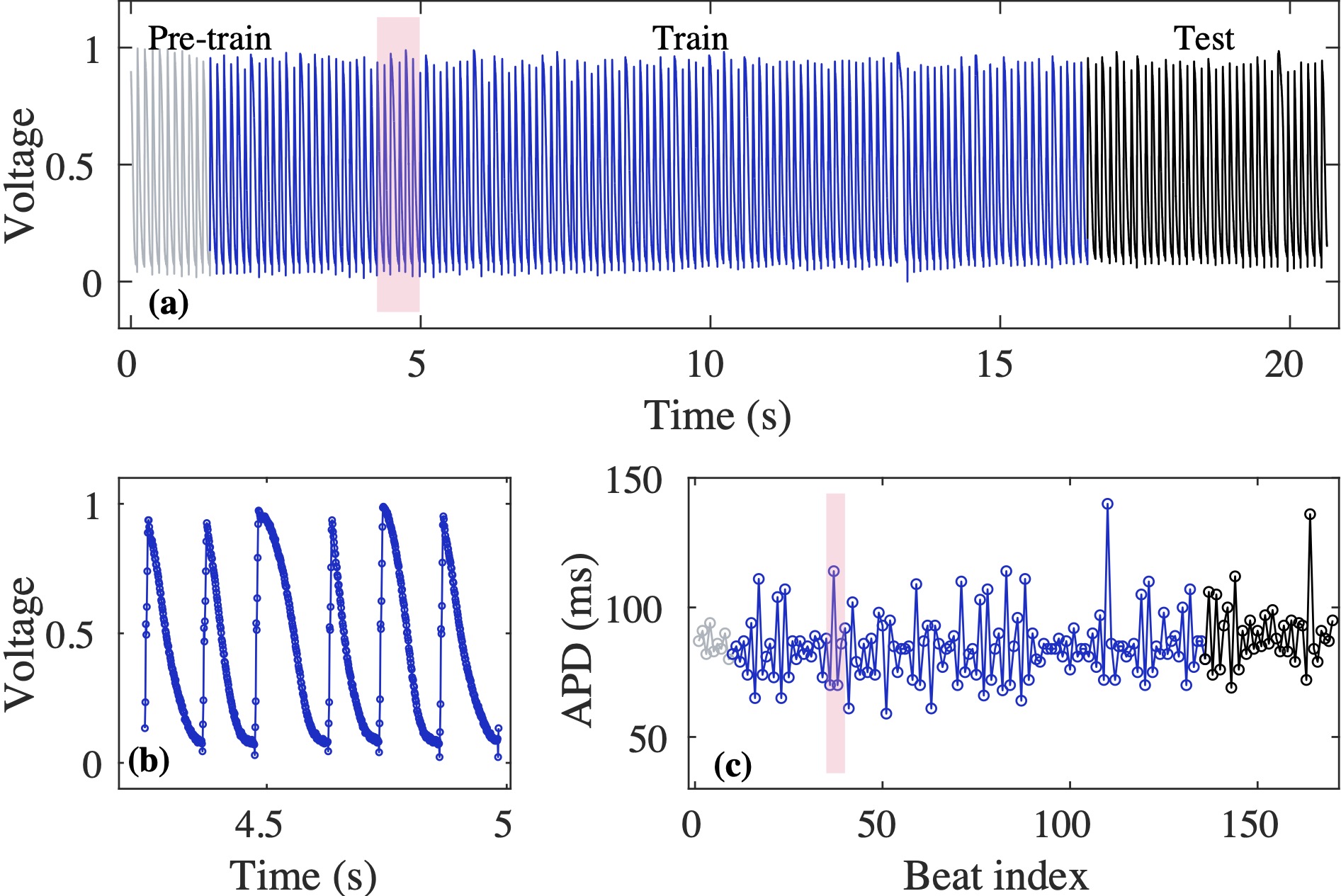 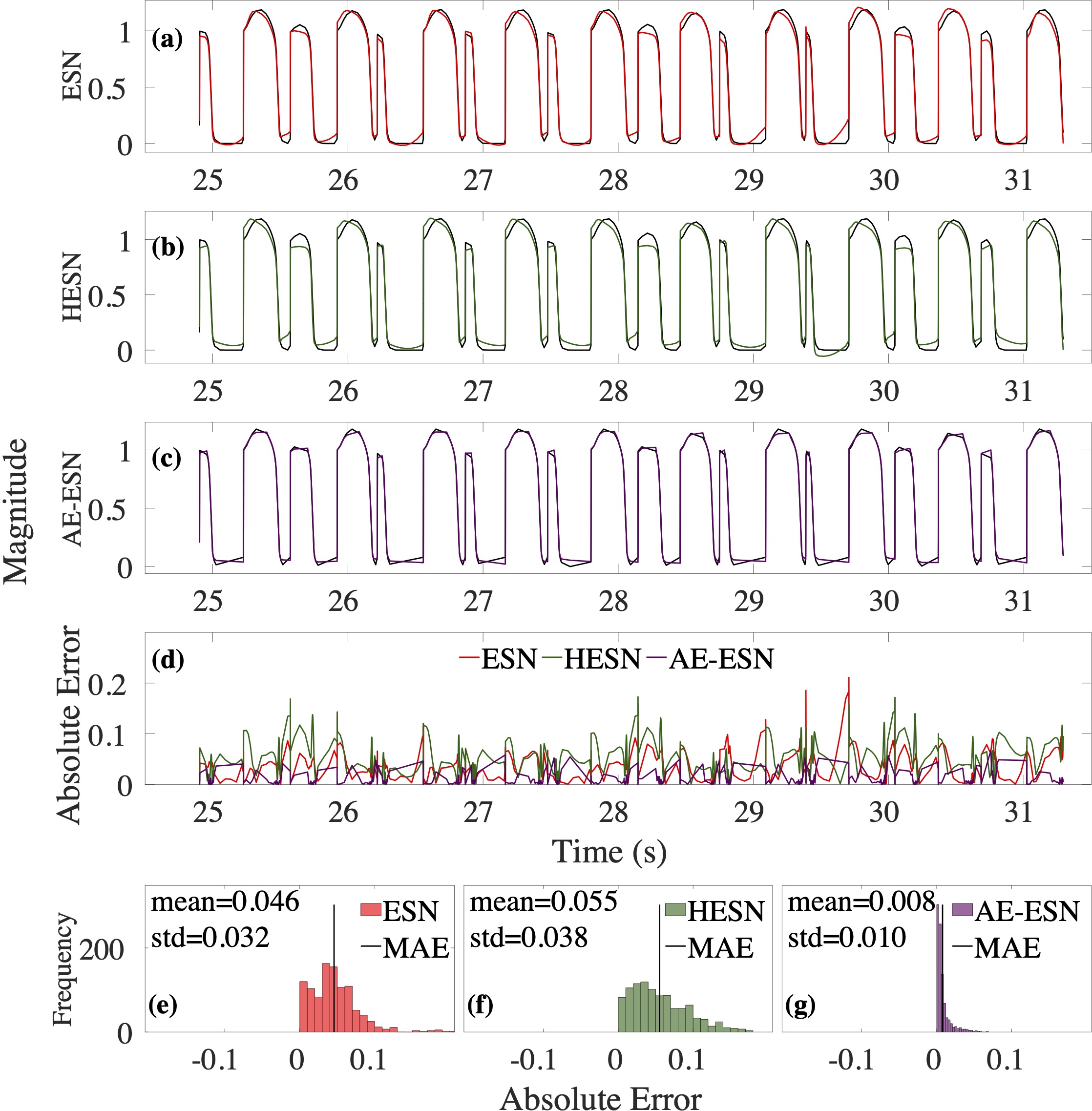 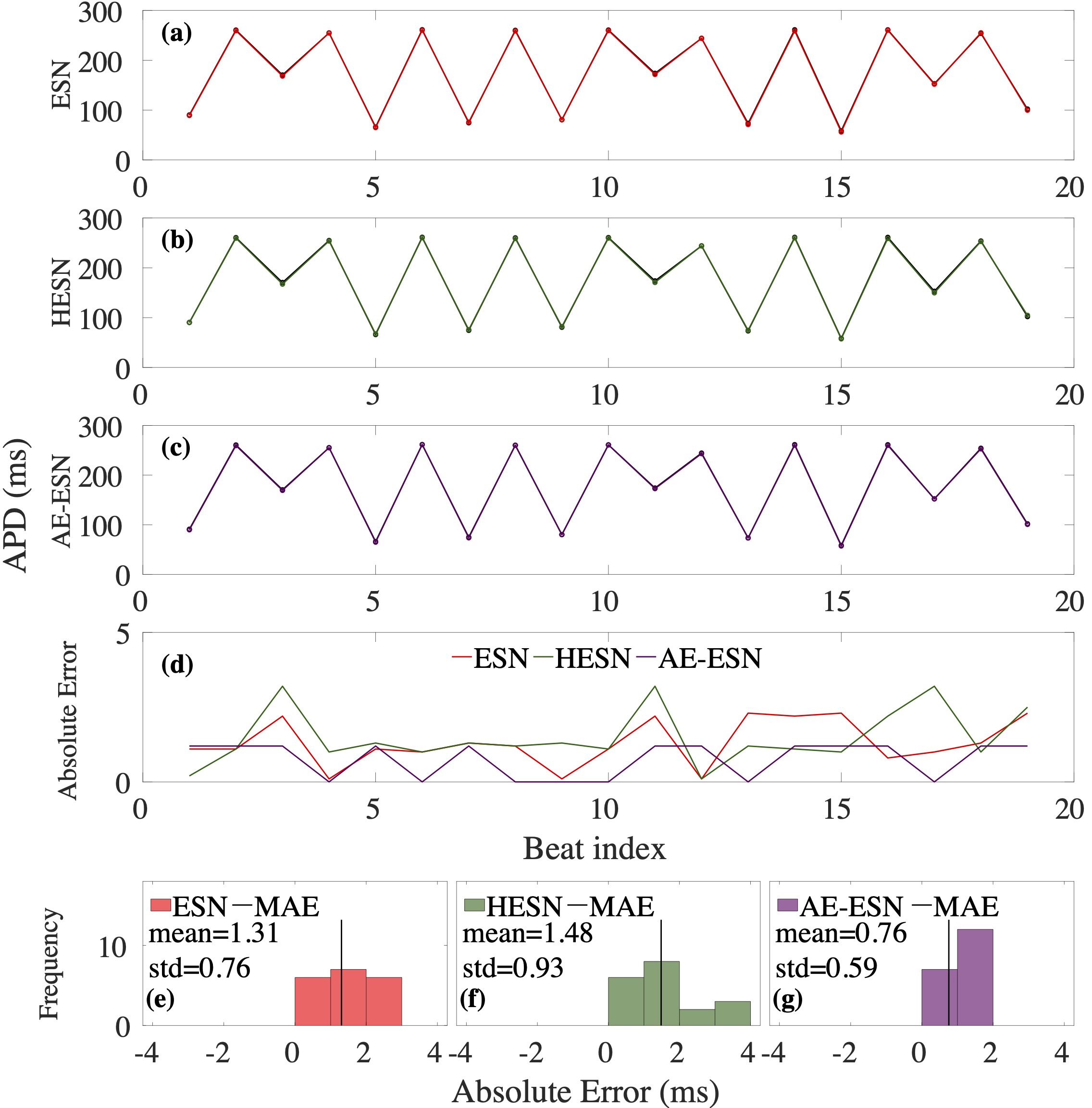 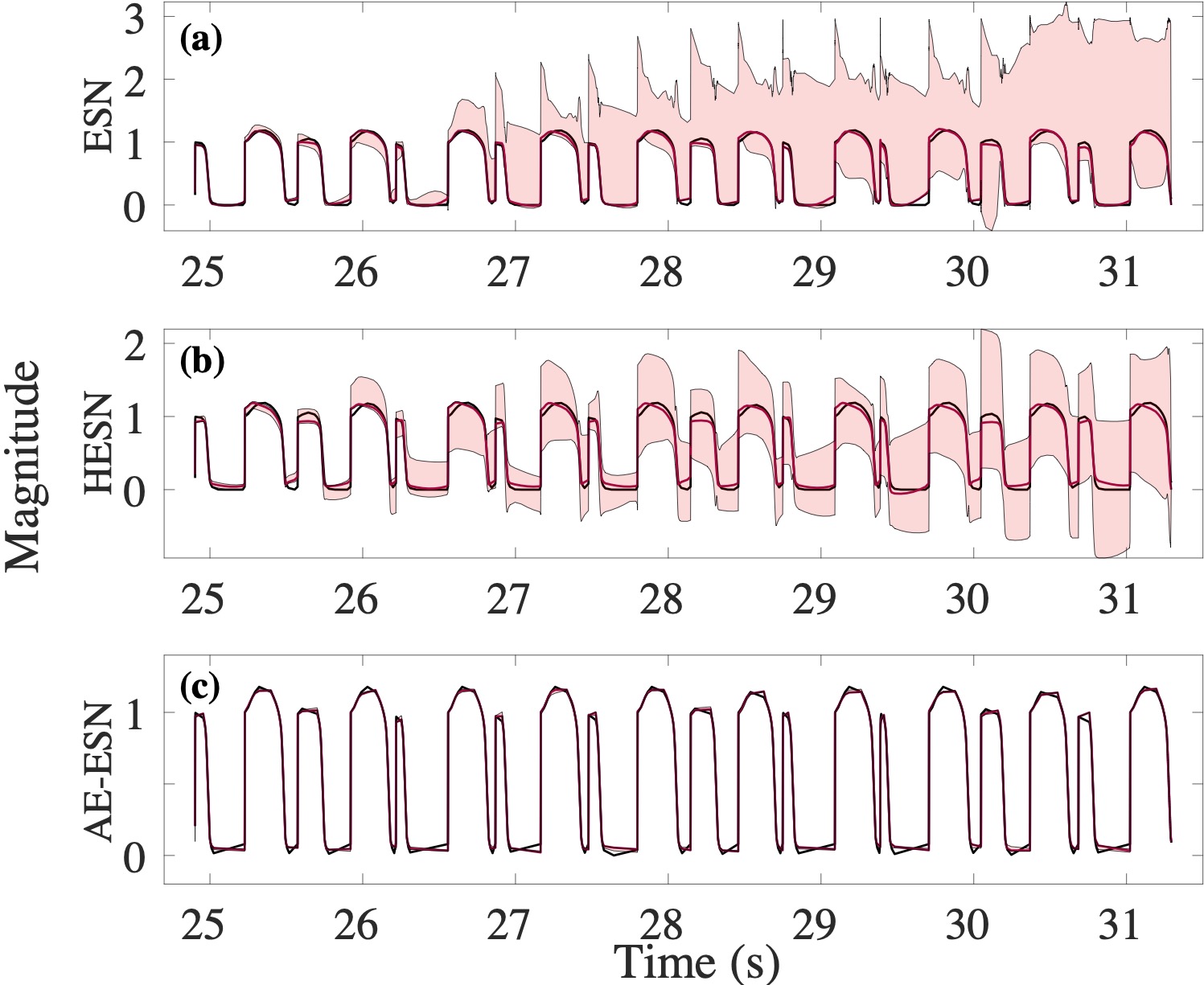 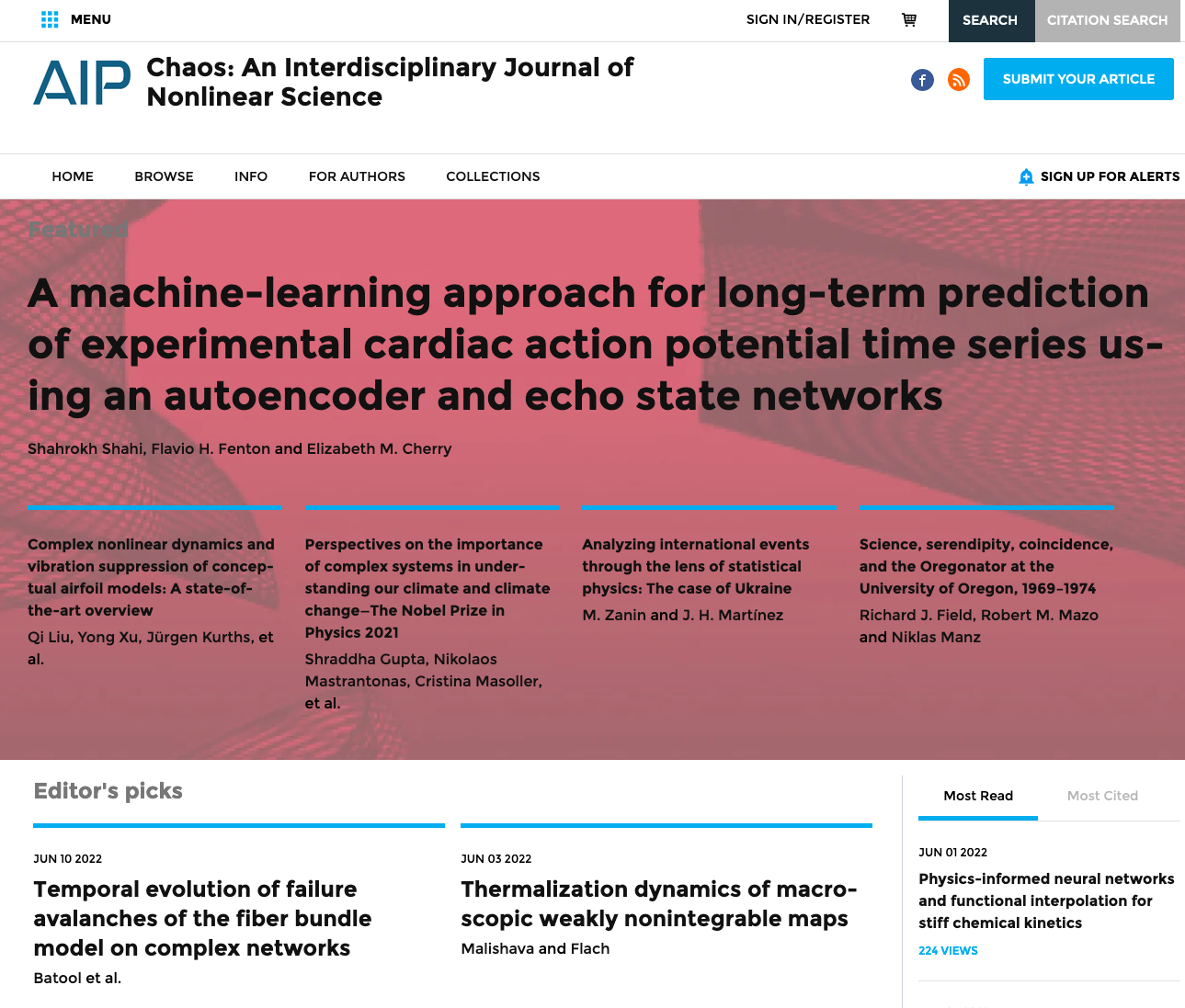 Selected as the Featured Article displayed prominently on the journal's homepage